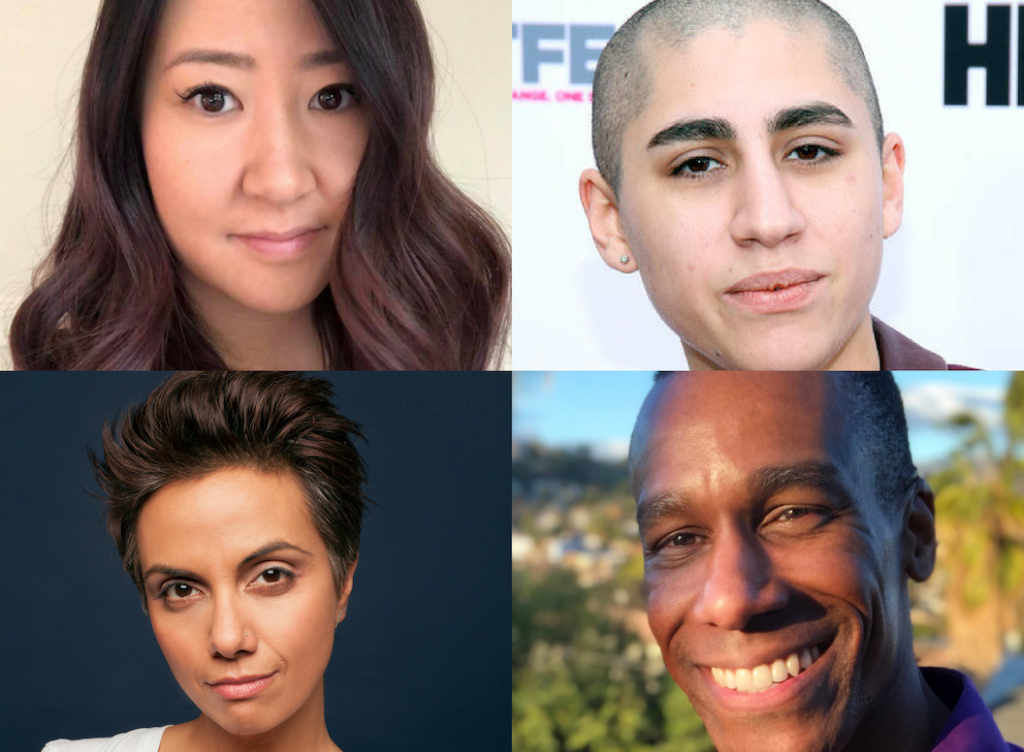 Come join some of Outfest’s favorite writers Naomi Iwamoto, Michelle Badillo, Hilly Hicks, and Fawzia Mirza as they discuss their experiences writing professionally in the film and television industries.

Naomi Iwamoto was born and raised in Los Angeles and is a graduate of USC’s MFA program where she focused on screenwriting and directing. Her debut short film, Lost & Found, was included in the inaugural Women Behind the Lens showcase at Paramount Studios and Ryan Murphy’s Director showcase. Naomi is an alumni of the Ryan Murphy Half Foundation Director Program and the CBS Writers program. Her pilot script Rice, Fish, and La Croix was named the 2018 Cinestory TV Fellowship Winner, a WAN Writer’s workshop winner, and was the first pilot script to go through the 2018 Outfest Screenwriting Lab in 21 years. Most recently she served as a staff writer on the CBS show Happy Together and her new film, In a Relationship, is set to premiere in 2019.

Michelle Badillo is a queer Latinx writer from Queens, New York. She was an Outset Fellow in 2015, and has since gone on to write on Netflix's "One Day at a Time" and Freeform's "The Bold Type" and "Besties (w/t)".

Hilly Hicks Jr. is a television writer/producer. His credits include Marvel's Jessica Jones, The Big C, Chicago Fire, Army Wives and the upcoming season of Sacred Lies on Facebook Watch. Awards and honors include the Peabody Award, the Berilla Kerr Foundation Award for Playwriting, a Backstage Garland Award for Playwriting and a Van Lier Playwriting Fellowship from New York Theatre Workshop. He has been commissioned by theaters across the country and developed plays at the Royal Court Theatre in London, the Sundance Theater Institute and the Eugene O'Neill National Playwrights Conference, among other organizations. He is an alumnus of New York University and Columbia University.

Fawzia Mirza is an actor, producer, writer who believes in the power of comedy to tackle divisive topics and breakdown stereotypes. She was named one of '10 Filmmakers to Watch' by Independent Magazine, a White House ‘Champion of Change’ in Asian American Art & Storytelling, a 3Arts Acting Grant Recipient, a ‘Top 10 Creative’ by Indiewire magazine, and a Djerassi Program Writing Resident. She's made award-winning short films, web series and documentaries. She received an SF FILM Society Rainin Fellowship to adapt her one-woman play, Me, My Mom & Sharmila into a screenplay. She's featured in the acclaimed Emmy-nominated Gotham, Peabody, and GLAAD Award-winning web series Her Story. Her first feature, Signature Move, which she co-wrote, produced and stars in (starring Indian film legend Shabana Azmi), world premiered at SXSW has screened at over 150 film festivals around the world, won 14 awards (Outfest Grand Jury Prize, Best US Narrative) and available on Amazon/iTunes. She wrote on the new limited series THE RED LINE, executive produced by Greg Berlanti and Ava Duvernay which airs April 28th on CBS.